Five Reasons Why Bitcoin is Going Up

Call it the “Respectability Rally”…

A few reasons for Bitcoin’s return to the record highs. It’s about $18,500 as of this writing, matching the previous highs from 2017’s original explosion.

Reason one: It’s going up because it’s going up. Don’t scoff, this is the reason most things in the markets happen and then the explanations are called for afterwards. I’m in financial television, I have literally watched this process occur in real-time. The more something moves in a given direction, the more people believe it will continue to go in that direction, until a breaking point is reached and a correction shakes things up a bit.

Reason two: Paypal and Square’s Cash App, according to reports, are in a race to acquire enough Bitcoin to facilitate the next generation of their money transferring services. They both seek to allow their massive user bases to be able to seamlessly transact with merchants in Bitcoin, moving money back and forth from sovereign currencies into Bitcoin, etc. This use case has been the holy grail all along – how do you get regular people who don’t know anything about cryptocurrencies to transact in cryptocurrencies? I don’t know how to read the code that went into Expedia’s website, but I know how to book a vacation on it. I don’t know to disassemble the engine of my Chevy Tahoe, but I know how to drive my kid to school in it.

Reason three: Wall Street legends are being won over. Don’t underestimate the pull of FOMO, peer pressure, idol worship etc. Read this thing by Niall Ferguson. And then this article in Barron’s about how institutions are afraid of missing out.

Reason four: Gold and silver aren’t “working.” Go look at a chart of gold or a gold ETF since the summer. It peaked in July in US dollar terms. The weakening (some would say plunging) dollar is one of the biggest macro stories around right now. Gold should be rallying. So far it’s not. Just fell below its 200-day last week. If you’re long gold as an inflation hedge, and you see copper and oil rallying while the dollar falls, you’re probably like WTF? Then you look at Bitcoin and see that it’s rising. Then you go on Twitter or Reddit and become exposed to the views of the new cool-kid crypto libertarians from the Valley who are saying Bitcoin is the new gold. And then the FOMO just ripples through every nerve-ending in your body, the envy and desperation to be a part of it crashing like a wave against the side of your skull. You’re anxious and excited and nothing but a buy order will satisfy the chemical cocktail flooding the surface of your brain. Don’t be embarrassed, people have done capricious things in the financial markets for lesser reasons.

Last thing I want to mention here is the Grayscale Bitcoin Trust. It’s been the only way for investors to gain exposure to Bitcoin in their stock market accounts and IRAs over the last few years. It’s a publicly traded trust that buys Bitcoin, you buy the ticker symbol and you pay a premium over the actual value of Bitcoin it owns. That premium you’re paying over the NAV of the trust is justified by the fact that it’s the only way to buy an ETF-like instrument that will trade with Bitcoin’s price. No futures trading necessary. No pin numbers. No cold storage or encryption codes needed. It’s a brilliant idea, my friend Michael Sonnenshein came on our YouTube channel this past March to explain it.

Anyway, what if the Grayscale Bitcoin Trust is no longer the only game in town for stock market investors to get their Bitcoin exposure? The CEO of Microstrategy announced he was going to $425 million dollars from his company’s treasury and convert those dollars into Bitcoin. His reason is that “cash is trash.” Some people say he’s a lunatic and that a public company should not be investing its money like a hedge fund. I emailed Jason Zweig, who wrote the story about him for Wall Street Journal, and I said if it works out, they’re going to give this guy the Elon Musk treatment. He’ll be a genius. The shares of Microstrategy, MSTR, are now trading along with Bitcoin’s price rise. So is Square, SQ, and to a lesser extent, PayPal. Grayscale now has some competition for the brokerage account in search of Bitcoin exposure. So, will GBTC’s premium to NAV remain as high as it’s been, historically somewhere between 15 and 30%? You can see that premium below via YCharts: 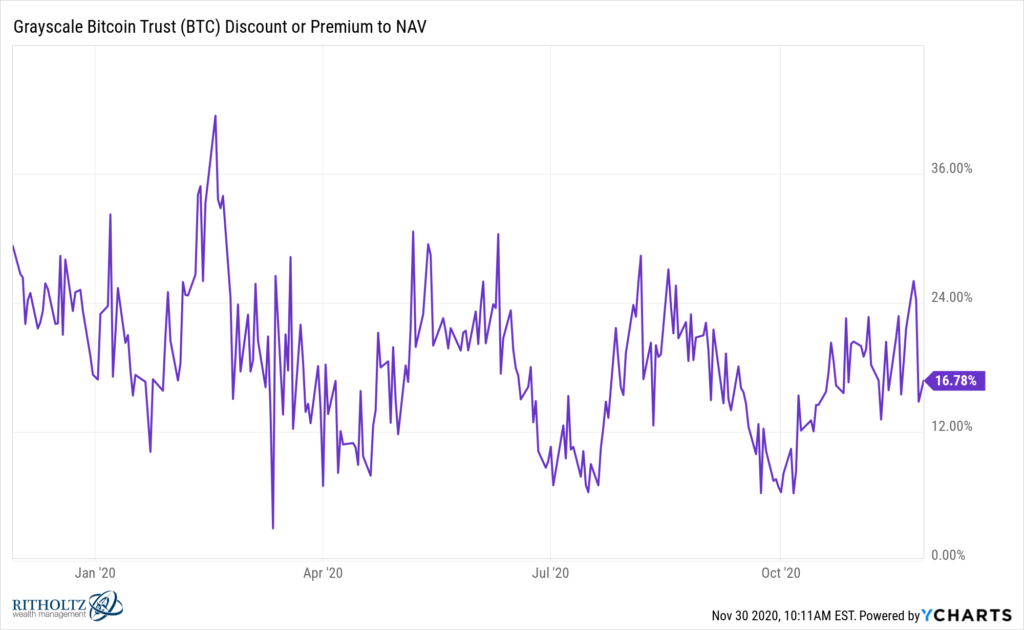 GBTC took in $720 million dollars in fund flows during the third quarter of this year. It started 2020 off with about $1.9 billion in assets under management and now it’s closer to $5 billion. They estimate that 84% of their shares are currently held by institutions. Many of these institutions have been content to own Bitcoin in a safe vehicle format that they’re comfortable with, like a publicly traded investment trust, rather than risk owning it in an online wallet, or offline storage vault or through some sort of derivative contract that requires continuous rolling and maintenance.

This is changing, slowly but inevitably. More access, cheaper pricing, less fear, less hesitation. Mainstream buy-in and adoption by the Fidelitys and PayPals of the world removes the counterparty risk concerns and the fear of theft from the front burner. The rise in price will serve as all the confirmation bias the adopters need in order to be spurred on even further into their allocations.